Easter is France’s second biggest family holiday after Christmas (the French don’t have the equivalent of Thanksgiving, instead celebrating le Toussaint (All Saints Day) at the end of October).  Easter is much anticipated because schoolchildren have two weeks of holiday at this time of year (often spent with their grandparents, another French tradition). Everyone gathers on Easter weekend for the highlight: the family meal.

So, what’s being served? Champagne and ‘amuse-bouches’ are often eaten first at the aperitif, while everyone gathers before sitting down at the table.

As it’s springtime, asparagus is often served as a first course, perhaps with fresh chives. As eggs are often a theme, the usual vinaigrette might be thickened with just a bit of hard-boiled egg yolk–a subtle may to make the normally light dressing a little richer.

A special Easter pâté might also be served; the traditional recipe is a square loaf of pâté baked with eggs inside, wrapped in puff pastry–which has a fun look when sliced.

Lamb is typically served as the main course (another traditional dish is chevreau (baby goat), with broad beans as the traditional side dish.

Salad and cheese are the third course. Typically, at a festive meal, there will be at least four cheeses to choose from: a blue cheese (like St Augur or Roquefort), a goat’s cheese (often with an ash-ripened covering), a semi-firm, drier cow’s milk cheese (like tomme, the classic from the French alps), and a softer, richer option (Camembert or Brie).

Dessert is varied, but there is often a pound cake rich in eggs. The French also often make an edible ‘Easter nest’, which is simultaneously a decoration and dessert–shaped in puff pastry in the form of a nest, and stuffed with edible chocolate eggs. A hit with the kids, it goes without saying. 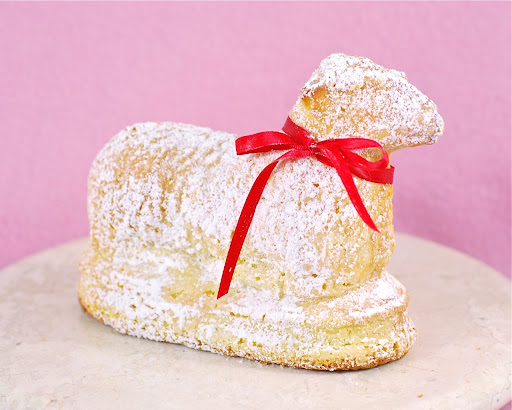 Each region will have its specialties too: the ‘lamala‘ (baby lamb) cake from Alsace, made in a special pottery cake mold only used at this time of year (it’s designed to stand up and look like a lamb, which it actually sort of does), or the ‘fouace’ bread (a sweet brioche somewhat like challah) from the south-west of France.

Eating a meal like this usually takes a few hours; the French eat slowly, pausing between courses, telling stories, enjoying one another’s company. It took me a while to get used to when I first met my husband, but now I enjoy these long, leisurely meals at the table. By eating small portions, and eating slowly, the French enjoy each of the tastes on offer without feeling (or being) stuffed. The art of slow food, something I had to learn (but am glad I did).